The highest performance GPU waterblock ever created, exclusively for the NVIDIA 4090 GPU.

The Signature 4090 GPU block is the epitome of the Optimus goal to make the absolute best possible. Using the world's highest surface area GPU cold plate, highly-targeted VRAM and power delivery cooling, as well as other exclusive technologies, Optimus isn't just a few degrees better, but double digits cooler than the next closest blocks. This means you're able to achieve a previously-impossible ~10c die-to-water temp delta, even with ultra high wattage GPUs.

When creating our Absolute GPU block, we started from the ground up. We knew the classic 2-piece GPU block was acceptable for low wattage GPUs, but the newer models like the 3000 and 4000 series required rethinking how to cool a GPU.

To handle the temps, a new four piece design was created: the top plate, middle copper plate, cold plate on the die, and then the rear XL Heatsink (the terminal, o-rings and screws aren't counted). This new style of block sandwiches the entire PCB to create perfect pressure on the die. With our standalone cold plate with the finest microfins, the die is able to be cooled with a massive surface area compared to GPU blocks with fewer, thicker fins.

Cooling is simple: more surface area = better cooling. Larger radiators perform better than small radiators. Same with cold plates, more surface area is able to dissipate heat at a faster rate than lower surface area cold plates. While large fin cooling designs were acceptable for lower wattage products, these days they are easily overwhelmed by modern higher power components. This is especially critical with new, smaller dies with far greater wattages. The smaller and more powerful it becomes, the more difficult it is to cool.

THe Signature block - like all Optimus products - is assembled using only metal-to-metal contact, meaning screws only ever thread into metal, not plastic. The vast majority of liquid cooling components are assembled into acrylic/plastic threads, which are extremely prone to stripping. With metal-to-metal construction, Optimus products can be reassembled multiple times without worrying about stripping or cracking the acrylic.

Every Optimus 4090 waterblock is designed for 24/7/365 performance. Originally designed for outdoor AI processing, Optimus blocks are made to take everything a home workstation can throw at it and more.

The Optimus 4090 block is designed to allow max cooling on the 4090 GPU die, VRAM and power delivery areas. Our XL Heatsink works as both a mounting system and a heatsink for the PCB itself.

How is this possible? Because older-style blocks with low fin counts simply aren't able to dissipate the heat from the critical areas. Thus, the PCB itself heats up, and a rear active backplate is used to try and capture more of that heat. But with a correctly designed main block, the heat is dissipated at the source. This is why our blocks are able to beat active-backplated blocks by significant margins.

To back this up, we compared our Signature Kingpin 3090 block that featured a massive, solid copper active waterblock vs our XL Heatsink. The 3090 has rear VRAM and a 1000w bios, so the heat should be even higher.

But we found the real-world performance differences between our ultimate active backplate and the XL Heatsink were non-existent. This is because our main block's performance is doing exactly what it should - cooling the important parts - and any extra PCB heat is easily handled by the XL Heatsink.

Classic GPU blocks use a solo o-ring to seal the block. The problem with the o-ring design is the inlet channel can leak coolant into the outlet channels, bypassing the fins entirely. You'll sometimes see this in the form of liquid flowing on top of the acrylic islands in the block. With the Optimus gasket, we're able to completely isolate the inlet and outlet channels with a single, custom gasket. And because the pure EPDM gasket is designed to perfectly match the block, placing the gasket is vastly easier and requires no silicone to seal the o-ring.

The Fujipoly 3.0mm rear thermalpad is custom designed by Fujipoly for Optimus waterblocks, for both performance and for long term use. Typically thermal pads can't handle multiple installations.

The Absolute 4090 waterblock installation is designed to be extremely easy, arguably the easiest on the market. This works because the block is designed to use our integrated rear heatsink aka backplate. This heatsink provides a full-PCB support with integrated massive thermal pad to both cool every square mm of the board, stabilize the block install and to prevent any issues with PCB bending. This means that aftermarket backplates are both unnecessary and unsupported. Only with an integrated rear heatsink do we believe the best performance can be achieved.

Optimus GPU waterblocks not only provide max cooling on the die, but also extra cooling on the VRAM and VRM areas. By creating extremely deep recesses over the VRAM and VRM, the liquid is far closer to the chips themselves, thus the heat transfer happens faster from chip-to-liquid than a GPU block without these recesses. The challenge, however, is making blocks like this takes extra time and precision, which is why it's not common practice to see deep coolant channels. 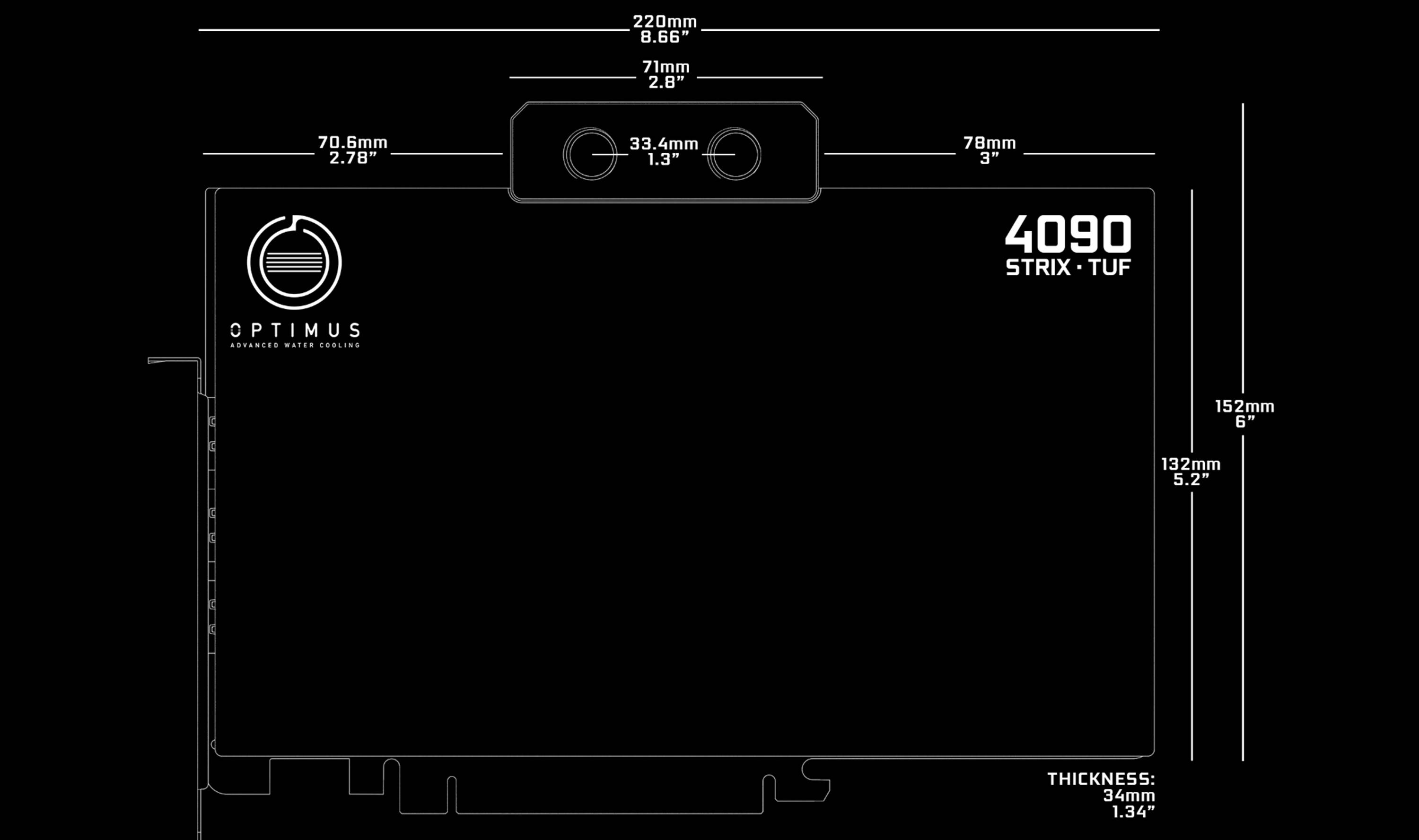 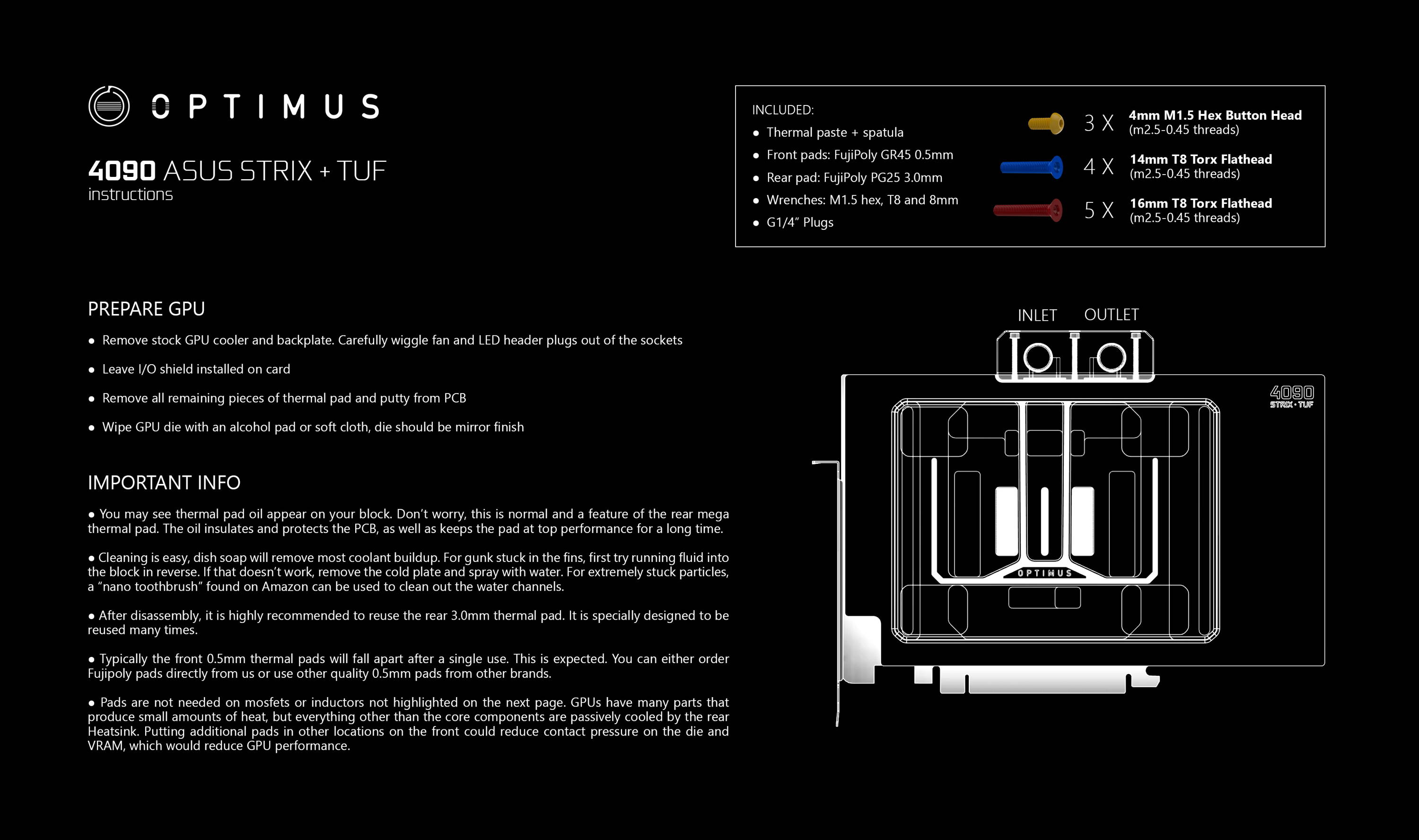 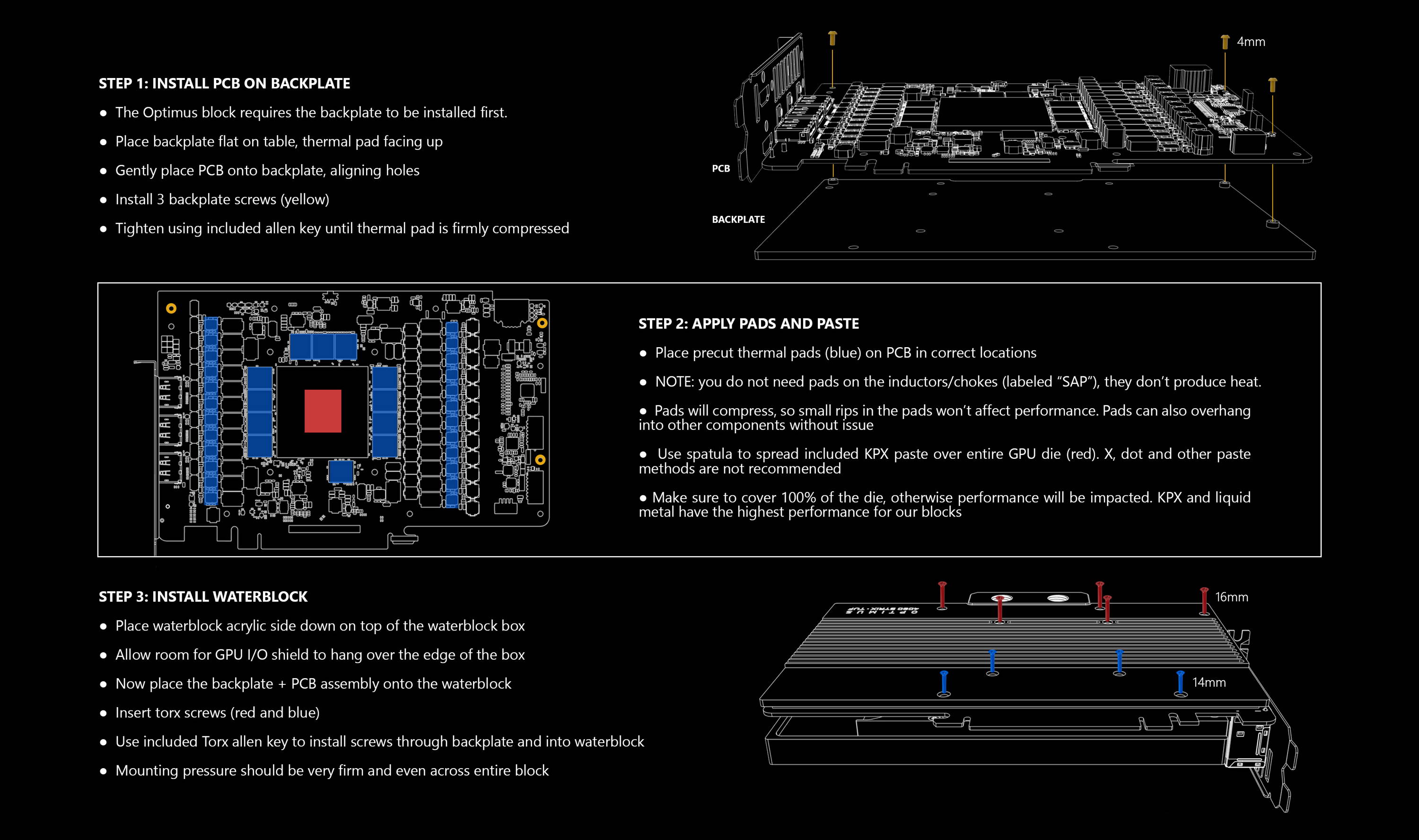